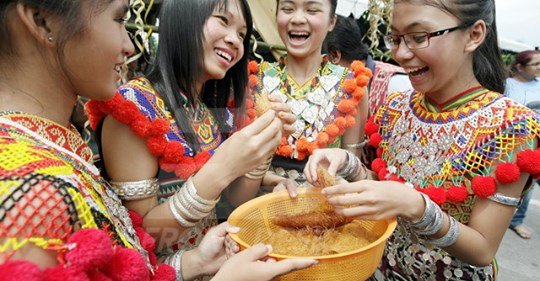 SIBU: The festive season is here again and this time around, it will be a more joyous occasion with Gawai Day and Hari Raya Aidilfitri celebrated at about the same time.

Last year, the festivals were 15 days apart, but this year Hari Raya Aidilfitri will fall on June 5, just four days after Gawai Day celebration on June 1.

Both the Dayak and Muslim communities will certainly be in the mood to celebrate as they share the festivities.

The festive season is an opportunity to visit (commonly known as ‘ngabang’ to the native tongue) neighbours and friends, and the unity we see is not merely a show as seen in most VIP open houses, where people come just to enjoy the scrumptious spread.

In fact generally most Sarawakians still observe the ‘ngabang’ tradition to ensure that true unity flourishes in the state, regardless in the urban or rural areas.

Tahir Mintal from Kampung Jemukan, Asajaya said he still visits the homes of his Dayak and Chinese friends during the festive celebration and his friends would also visit him on Hari Raya Aidilfitri.

“This had been going on since we were small until today. If we are courteous to people they would reciprocate,” he said.

Gerald Ningkan from Kuching said as there are several mixed marriages in his family, relatives of various ethnic groups would visit during the Chinese New Year, Gawai, Hari Raya and Christmas celebrations.

“This is the advantage that we have. We celebrate all festivals except Deepavali,” he said.

Meanwhile military retiree from Sibu, Patros Tadong Ngamanat said the tradition of visiting one another during the festive celebration, has changed over the years.

“Previously we were free to go to anybody’s house during Gawai or Hari Raya. Even though we do not know each other, guests would still be entertained but nowadays things are different, he said.

Massmail Anyan through Facebook said people no longer gate-crashed into people’s homes during festivals as they are more aware of each other’s culture and understand that the Ibans, for example, need time to be with their family and guests.

Massmail also commended the Iban community for understanding the sensitivities of the Muslim community in serving halal food.

Joyce Roni who is from Sarikei and now residing in Selangor said the ngabang tradition had helped maintained lifelong friendships.

“In the case of my family, my late father’s friends still visit us to this day. Though my father has long gone, the friendship remains,” she said. — BERNAMA