Utama News Feud between Singapore PM and sister in public

SINGAPORE: Lee Kuan Yew would have cringed at the hero worship just one year after his death.

The response of Singaporeans during the seven days of national mourning when my father, Lee Kuan Yew, died last March was unanticipated – even by Singaporeans themselves, not to mention foreign observers. As his daughter, I too was astounded by the intensity of Singaporeans’ feelings towards my father, said Dr Lee Wei Ling on his Facebook.

Wei Ling is Singapore Prime Minister’s sister. She suggested that  her brother, the Prime Minister, Lee Hsien Loong, was “abusing his power” by conducting elaborate anniversary events and trying to establish  a political dynasty.

AFP regarded the dispute regarding the anniversary of the death of their father as “rare and unexpected”.

Lee Kuan Yew was the city state’s founding leader who passed way on March 23, 2015. The government organized a host of public programmes this year to commemorate the anniversary of his death. Lee, regarded as a statesman  and an architect of modern Singapore was prime minister from 1959 to 1990. 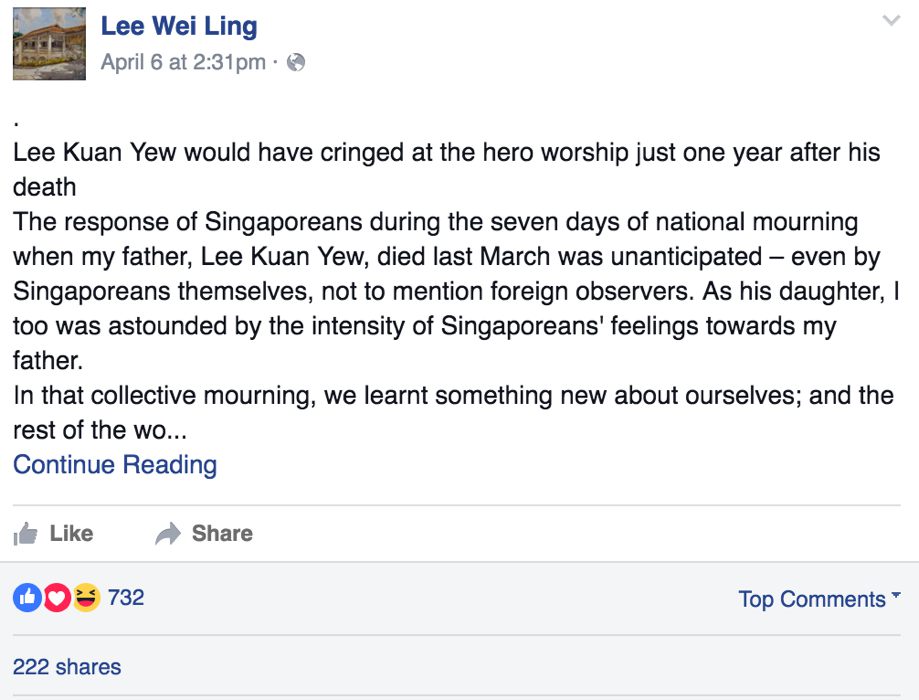 We came together in a moment of sorrow. We waited patiently under harsh weather conditions to bid farewell to a man who had been the leader of the nation’s founding fathers – one who had given his deepest thoughts and all his exertions towards taking forward the welfare of his countrymen, she  said.

Those who mourned remembered this. Despite stressful weather conditions, everyone was patient, tolerant, even positively kind and generous to each other. One SPH reporter described it as a miracle. I thought the same.

The lesson we learnt about ourselves gave us self-confidence and gained us the respect of other countries. As Lee Kuan Yew’s daughter, I found tremendous comfort to know that my father’s efforts were recognized by Singaporeans.

But I also knew that my fellow Singaporeans and I must now prepare for life after Lee Kuan Yew.

Life seemed to return to normal for Singapore over the past year. Personally, it was a different story for me. That I don’t express my emotion in public does not mean I am not hurting inside. The wound has only recently healed, and not even completely. So I declined to comment for publications marking the first anniversary of my father’s death.

What made me write this article was a front page report in The Straits Times (Mar 21). It carried a photo of an outline of Papa’s face made with 4,877 erasers that form an installation which is 2.3 m wide and 3.1 m tall, titled Our Father, Our Country, Our Flag.

That was the work of 110 Singaporeans aged 17 to 35 using erasers with the Singapore flag on it.

It was a well-meaning effort but it made me wince. Here is why:

The photo brought back memories of my first visit to China with my father in 1976.

It was the end of the Cultural Revolution and I have vivid memories of our delegation being greeted by young children lining the streets chanting loudly: “WELCOME, WELCOME, A VERY WARM WELCOME.”

It was very contrived and my father was not impressed. We are Singaporeans, not prone to excessive, unnatural displays of emotion.

Papa merely waved at the children, as he would have done in Singapore. I refused to even do that. I stared straight ahead, feeling very sad for the people of the “Middle Kingdom” that was still run like a kingdom.

Our Chinese hosts noticed our responses. The Singapore delegation did not come as though we were returning to our ancestral country, nor as representatives of a vessel state. When we bade the PRC delegation farewell at the China Hong Kong boundary, the PRC chief protocol officer said to Lee Khoon Choy, “Your PM is a tough man.” We didn’t think he meant only physically tough. They could not melt us with their over exuberant display of goodwill. We continued to behave as Singaporeans as opposed to PRC Chinese.

I acknowledge the outline of Papa’s face made with erasers as a sincere gesture. But in looking at acts of commemoration in general, I would ask how the time, effort and resources used to prepare these would benefit Singapore and Singaporeans.

I also question the need for a commemoration so soon after Papa deaths, when last year’s event still hang heavy on the hearts and minds of some people. Allow me to compare how two other world leaders who were adored or apparently adored were commemorated by their government and/or people.

Firstly when Chairman Mao died on 9 September 1976, the country was in shock. This was partly the result of the keenly felt loss of a semi-divine leader, but also caused by the enormous uncertainty about what the future held in stock for China and its people.

he power struggle between Jiang Qing and the Gang of Four on the one hand, and Mao’s designated successor Hua Guofeng on the other, which had been smoldering for some time caused grave anxiety for many people in China.

However, on 6 October 1976, within a month after Mao’s death, Hua had the Gang of Four arrested. Two days after the arrest of the Gang, the highest organs of the party and the state decided that a Memorial Hall would be built as a permanent tribute to the founder of the People’s Republic.

On 24 November 1976, the foundation stone for the gigantic building, located to the south of the Monument to the People’s Heroes on Tiananmen Square was put in place. The construction went on day and night, and the building was finished on 29 August 1977. On that same day, Mao’s body, which had been embalmed and placed in a crystal sarcophagus, was moved to the Hall. On 9 September 1977, a ceremony was held to commemorate the anniversary of Mao’s death and the completion of the Hall.

The anniversary of the funeral of Winston Churchill took place 50 years after the actual funeral on 30 January 1965, which brought the capital to a standstill and took place a week after his death aged 90 on 24 January, is being marked by scores of events, including a service and wreath laying at the Houses of Parliament, a memorial service at Westminster Abbey, and the rebroadcast by BBC Parliament of the original live coverage. In a tribute to his most famous predecessor, the prime minister, David Cameron, said: “Half a century after his death, Winston Churchill’s legacy continues to inspire not only the nation whose liberty he saved, but the entire world. His words and his actions reverberate through our national life today.”

Compare the actual time from death to the first commemoration, and the different activities involved in the commemoration in the twi leaders above. Which one would Papa wish commemoration to resemble. Also bear in mind, that unlike almost all leaders, Papa was dead set against a personality cult and any hint of cronyism.

If he was forced to choose one form of commemoration, Papa would have objected the less if the commemoration resembled that held for Winston Churchill. Do note that Churchill unlike Papa cherished glory and a place in the history of his county. Compare what Churchill’s commemoration which was conducted 50 years after his death with the activities that have been taking place in Singapore that will continue for an entire week. I think Papa would have objected if he were able to convey his view.

Perhaps we should allow some space for sentiment for those who feel last year’s events that took place immediately after Papa’s death were not enough to honour Papa.

Papa’s focus never wavered. What he did was all for the welfare of the nation and its people. Yes, it is good that we remember history. But it would be even better if we honour Lee Kuan Yew by working for the well-being of Singapore and Singaporeans.

Any veneration could have the opposite effect and lead future generations of Singaporeans to think that my father’s actions were motivated by his desire for fame, or creation of a dynasty. He strove hard and determinedly in life to advance Singapore, and not for his place in history, or leaving a great legacy. He is a rare politician and leader, who did what he had to do with no thought to any gain for himself.”

Meanwhile, Lee Hsien Loong in his Facebook post yesterday said he was deeply saddened by his sister’s claim that he has abused his power to commemorate the one-year anniversary of Mr Lee Kuan Yew’s passing in order to establish a dynasty and regarded the accusations were completely untrue.

“The first anniversary of a person’s passing is a significant moment to remember him and reflect on what he meant to us. The more so with Mr Lee Kuan Yew. The Cabinet had discussed how we should mark the occasion. My advice was that we should leave it to ground-up efforts. Groups should keep their observances in proportion, and focussed on the future” he said.

Lee siad  Cabinet recognised the strong desire of many Singaporeans to show their respect for Mr Lee, and honour what he did for us. We reviewed the events and observances that different groups had planned, and agreed that they were generally appropriate. They expressed the sincerely felt sentiments of Singaporeans, which my Cabinet colleagues and I deeply appreciate.

“The idea that I should wish to establish a dynasty makes even less sense. Meritocracy is a fundamental value of our society, and neither I, the PAP, nor the Singapore public would tolerate any such attempt,” he added. – Sarawakvoice.com

Siburan to be made a district